Day Trip - A recreational bicycle ride of more than an hour, which happens within one day, during daylight hours. See also: Touring,

Deflection - Bending of bicycle parts due to the force of riding.

Degreaser - A chemical which dissolves lubricant and is used to clean bicycle parts. Kerosene is low-cost, and flammable but not explosive, but there may be even better materials now available. Do not use gasoline. It is explosive. In the right circumstances, gasoline can catch fire without provocation at 76 degrees Fahrenheit. Synonym: Solvent.

Derailleur - A mechanism that guides the bicycle chain onto one of a pile of sprockets to change the gearing of the bicycle. By operating a shift lever, generally located somewhere near the handlebar, a cable pulls a derailleur which then aligns the chain with a sprocket. There are front and rear derailleurs. A rear derailleur controls from three to eight sprockets mounted on the rear wheel. A front derailleur controls from two to three sprockets mounted on the pedal crank. Some bicycles have a rear derailleur but no front derailleur. By selecting a large crank sprocket, and a small wheel sprocket, the bicycle will go fast, but be harder to pedal. For climbing hills and starting out, the rider will select a small front sprocket, and a large rear one.

Derailleurs do not work unless the pedals are turning forward. Do not change gears when idling, or pedaling backward, this can cause damage. This is why experienced riders switch to a low gear before they come to a stop. The derailleurs are as fragile as they look so be careful about dropping a bicycle on its right side, or getting anything such as loose clothing caught in the front derailleur.

Rear derailleurs have a system composed of two small pulleys for taking up the slack in the chain which results when using less than the largest combination of sprockets. 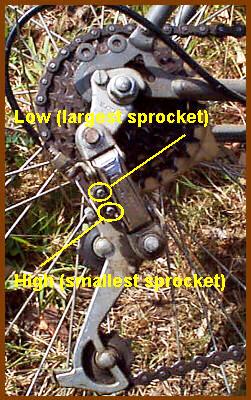 Diamond frame - This is the technical term for the standard 'men's' style bicycle frame. If you look at a diamond frame with no fork installed, it appears to be a diamond shape as seen from the side. See Men's bike.

Diet - Bicycle racers pay attention to their diets, but they are not all in agreement as to what is the most successful diet. See Vegetarianism and Carbo-loading.

Dish - Many rear hubs have flanges that are offset to the left in order to make room for the freewheel.  In order for a rim to be centered over the whole hub, rather than these offset flanges, the spokes on the right side are shortened.  This is called 'dishing.'  Some of the better truing stands have enough accuracy to dish a wheel in the stand.  A dishing tool can also be used to test the dish.  The dishing tool is a large bow that stretches across the diameter of the wheel.  In the middle of the bow is an adjustable indicator that is set to touch one side of the hub.  The dishing tool is then set on the other side of the wheel.  If the wheel is dished correctly, then the indicator will just touch that side of the hub in the same way.

Disk brake - A brake that consists of a disk mounted around the hub on one side of a wheel, and mechanism that squeezes friction pads against the disk when a brake hand lever is squeezed.

Double-butted Spokes - These are spokes which are thinner in the middles than at the ends. Except in unusual circumstances, spokes break at the ends, not the middle, so weight and wind resistance can be reduced by making the middles of the spokes thinner.

Double-century - A ride covering two hundred miles in one day.

Drafting - Following another bicycle or other vehicle to take advantage of the vacuum created. A vehicle moving through air displaces the air momentarily. Because air is fluid, it does not return to fill in the hole created immediately. There is a low-pressure area behind a vehicle, where it is easier to ride, since the rider who is drafting does not have to move as much of his or her own air out of the way. This low pressure area is called the slipstream. Mile-A-Minute Murphy earned his nickname near the turn of the century by drafting a train at sixty miles per hour. Drafting is commonly used by racers to conserve energy. Much of the strategy in team racing is involved in figuring out who should draft who at various times. Synonym: Slipstreaming.

Drill press - This is a tool that drills precise holes.  Some bike shops have drill presses for customized fabrication.  In a pinch, a sturdy drill press with a moveable vise can fill in for a milling machine.

Dropouts - The slotted portions of a frame or fork to which the wheel is mounted.