Handgrips - Placed on the ends of most handlebars, these provide a comfortable and safe place to put one's hands. Handgrip installation can involve some technique. To remove old grips, if they will no longer be used, you can cut them off. If you want to save them you can:

1. Blow compressed air under the inside edge of the grips, and they will easily slide off. Do not fill the handlebar with compressed air. It is slightly dangerous and unnecessary.

2. Lay a pair of tongue and grove pliers over the handlebar (with a cloth layer between to avoid marring the handlebar) against the edge of the grip. Bash on the side of the pliers with a soft hammer to drive the grip off.

Handlebar - An aluminum alloy or steel bar that extends from the handlebar stem and holds the tape or handgrips, where the rider places his or her hands.

Handlebar plugs - Rubber, plastic or metal plugs which are fastened into the ends of handlebars to prevent injury, and/or to hold handlebar tape in place. 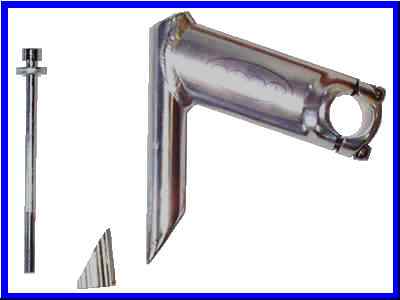 Handlever - The control on a handlebar for operating a brake. Synonym: Brake lever.

Headset - The bearings in which the fork is mounted.

Headtube - The front tube of the bicycle frame through which the fork is mounted.

Helmet - A protective shell worn over the head to protect a bicyclist from rim impact as a result of an altercation with a car, or just falling off a bicycle (70% of the people admitted to hospitals for bicycle mishaps were not hit by a car, but they just fell or smashed into something stationary). Most bicyclists do not hit the top of their head, but the side instead, and helmets take this into consideration with more protection around the edges than at the top. Leather helmets, as racers used to wear, have been determined to be not particularly useful, so most helmets today are constructed of a tough plastic shell, lined with crushable foam. The chances of a head injury without a helmet are slight, but the risk is great, because head injuries are difficult or impossible to recover from. Wouldn't you hate spending the rest of your life as a vegetable?

Having been in bicycle shops for many years, I have heard a large number of stories with a common theme: "If I wasn't wearing my helmet, I wouldn't be here now!"

The story I found most interesting was from a woman who did not wear a helmet because she did not want her hair to get sweaty. She was hit by a car and struck her head on the ground. After hospitalization for a concussion she was released, and all was well, except for one thing. Since that time, and forever on, she can no longer distinguish one object from a group. In a room full of people, she hears everyone talking, not just the person who is right in front of her, and talking directly at her. She cannot go shopping. If she wants laundry soap, for instance, she cannot pick one box from the whole row of laundry soap in a grocery store. She sees all the boxes of soap at once, and is totally incapable of choosing just one.

Hex head - A six-sided hole recessed into bolts and screws into which you can insert a hex wrench to turn the bolt or screw. Synonym: Allen head - which see.

Hex Bolt - A bolt with a six-sided hole into which you can insert a hex wrench. Synonym: Allen bolt - which see.

Hex Wrench, Hex Key - A six-sided tool which can be inserted into hex bolts to turn them. Synonym: Allen wrench - which see.

High-carbon steel - A steel which has more carbon than "mild" steel. It is used where more strength is required such as in bearing surfaces and springs.

High gear - A large sprocket at the cranks turning a small one on the rear wheel will cause the bicycle to go fast, but will be hard to pedal. This is a high gear.

Highrise - A style of handlebar in which the ends are much higher than the top of the handlebar stem.

Hub - The center of a wheel, containing an axle and bearings, and sometimes some other functionality, such as a three-speed planetary gear set or a coaster brake.

Hub Shell - The outermost component of a hub - the hub body.

Hub flanges - The sides of a hub to which the spokes attach.

Huret - A French manufacturer most known for derailleurs and freewheels.  For many years, Schwinn's most common models were equipped with Huret derailleurs.