Fatigue - A situation in which a component breaks because it has been flexed or stressed too many times. See also: Spoke fatigue.  Work-hardening is a specific form of fatigue.

Ferrule - A small cap that prevents the end of a cable inner wire from fraying.

Fixed gear - A rear sprocket solidly attached to the rear wheel in such a way that you cannot coast. If you pedal backward, the fixed-geared bicycle would go backward. Track bikes have fixed gearing.

Flanges - the outermost part of a wheel hub - the part to which the spokes attach.

Flat spot - Usually applied to tires or bicycle wheels, this refers to a condition in which the radii of a section of the tire or wheel are shorter. In the case of tires, this is most often because the tire is not mounted well. It must be deflated, manually adjusted and reinflated. Other reasons for a flat spot in tires is poor quality, or an incorrect fit.

Flat spots in bicycle wheels occur from hitting potholes or curbs, or from incorrectly adjusting spokes. It is easy when trying to correct a lateral alignment problem in a wheel, to tighten too many spokes in one area, resulting in a flat spot. The cure is to loosen the spokes at the flat spot, and tighten all the others around the wheel. If that is not sufficient, the spokes at the flat spot can be removed, the flat section of the rim can be hit with a mallet until it bulges outward slightly, and then the spokes can be reattached and tightened to bring the wheel to its natural round state.

Floating adjustment - An adjustment which cannot seem to be pinned down. Common cases are a shifter which does not seem to work the same way twice, often because the cable is sticking or kinked, or a wheel bearing which seems too loose yet too tight at the same time, caused by inexpensive or worn bearings.

Folding bike - A bicycle that folds in the middle to make it easy to store. Most folding bikes have twenty-inch or sixteen-inch wheels. Folding bikes are preferred by motorhome and trailer travelers, people who live in small apartments, and sometimes by those who often travel in airplanes.

Folding tire - A conventional thin tire with a plastic or fiberglass rather than steel bead which can be folded for storage when not in use.

Footpegs - Devices that screw onto the end of wheel axles so that the rider has a place to put a foot.  Footpegs were originally developed for passengers (not a good idea), but have become an important piece of equipment for freestyle bicyclists who have developed many tricks involving putting one's feet in other places than on the pedals.

Fork - The part of a bicycle frameset that holds the front wheel. The fork is a single piece which is composed of the steering tube, fork crown, fork blades and dropouts. A single fork is frequently but inaccurately called, "forks."

Fork Blades - The twin tubes of a fork which extend from the crown to the dropouts at which the front wheel is mounted.

Fork Crown - The section of a fork where the fork blades and steering tube come together.

Frame - The skeleton of a bicycle. A frame without a fork, or a frame plus a fork may be called a "frame."

Frameset - A frame and a fork. Sometimes a headset is included with a frameset. If you have a frame custom built, you get a fork with it, therefore it can be called a "frameset."

Frame shifter - A shifter or set of shifters mounted on the downtube.

Frame tubing - The metal tubes from which a bicycle frame is built. Tubing is most often steel alloy, but can be aluminum, titanium, plastic, or glass, graphite or boron fibers.

Fraying - A condition in which the inner wire of a control cable comes unraveled. If the unraveling happens beyond an anchor bolt, the condition is just annoying and ugly. If it happens anywhere else, it indicates that the cable will die soon, probably when you are depending on it the most (!) and should therefore be replaced. Fraying at the end of a cable can be prevented by soldering, or by pressing on an anti-fray cap, called a ferrule. Ferrules are little aluminum or plastic pieces that just slip on the end of the cable inner wire. The aluminum ones are squished with pliers to keep them from falling off.

Free mount - To get on and start riding a rideable machine without hanging onto something such as a fence or pole. This is most often applied to unicycles and related contraptions, but can also apply to freestyle bicycling in which the rider does not stand on the pedals or sit on the seat in the conventional way.

Freestyle - 1. Doing bicycle performance tricks which are not regulated within a set of rules. 2. A bicycle specially equipped for freestyle riding. The most common freestyle bicycle is like a BMX bike. It may have a longer frame and a rotor so the front wheel and handlebar can be turned around and around. The rotor is a device which fits around the handlebar stem and allows for a cable connection to a rear brake from a hand lever on the handlebar without tangling up the cable. Foot pegs may also be found on the ends of the front and rear wheel axles so the rider can stand on parts of the bike other than the pedals. Freestyle bikes are usually equipped with single-speed freewheels and caliper or cantilever brakes at both wheels.

Freewheel - One or more sprockets mounted around the hub of a bicycle rear wheel. Inside the freewheel is a ratcheted surface and pawls (spring-loaded flippers) which allow the freewheel to spin freely in one direction, but cause it to turn the wheel in the other direction. This allows coasting and pedaling backward. If the freewheel has two or more sprockets, then in combination with a derailleur, the gearing can be changed during use by guiding the chain onto one or another of the sprockets, so that the rider can easily go up hills, but will not run out of speed on the flats or down moderate hills.

Freewheel remover - A tool with which you can grasp the core of a non-cassette freewheel and unscrew it from the hub of a rear wheel. Synonym: cog tool.

French Standard - A set of dimensions used to maintain parts interchangeability among all bicycles following the French Standard. For instance, pedals on a Peugeot will fit cranks on a Jeunet. See also Schwinn, American Standard, Italian Standard, English Standard.

Front derailleur - A derailleur that guides the chain among two or more chainrings (sprockets mounted to the crank). 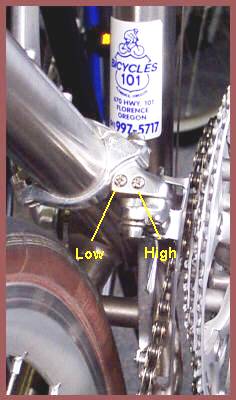