Pannier (pan' year) - A canvas or nylon cargo carrier which mounts alongside the rear wheel. They are usually used in pairs, and are referred to as "panniers."

Park - A manufacturer of bicycle tools. They are most known for bicycle repair stands and wheel truing stands. Most of their tools have blue handles.

Patch kit - Since flat tires are the most common failure on the road, many riders carry a portable pump and a patch kit. A traditional patch kit contains a scraper, a few small patches of sheet rubber, and contact cement. Some newer patch kits are simpler - no glue is required. To use a traditional patch kit, the punctured inner tube is exposed, and the hole located. The area around the hole is scraped to remove the oxidized surface of the inner tube rubber. The glue is applied, and allowed to dry fully. Letting the glue dry fully is essential. A plastic or foil covering is removed from a pre-glued side of a patch, and the patch is pressed into position over the hole in the inner tube. The wheel is reassembled and the tire is pumped up. The happy bicyclist continues the ride. A couple of points that you may find interesting:

1. Many patch kits are provided with metal scrapers that are too course. They can actually grind new holes in the inner tube. A wise choice is to throw a metal scraper away, and replace it with a small square of sandpaper.

2. Many riders think the glue must be set on fire! That's because some patch kits from days gone by did require setting the glue on fire. But not these days.

3. The glue must dry fully before applying the patch. If you are not familiar with contact cement, this will seem so strange you won't want to do it, but you must wait. Sticking a patch on wet glue does not work well.

Pawl (pronounced like "Paul") - A small flipper which engages a ratcheted surface. Pawls are used in freewheels and planetary gear sets to allow rotary force to be transferred in one direction, but not the other. Pawls allow for coasting. When you hear click, click, click when coasting, this is the pawls running against the ratchet. See also: Ratchet.

Pedal - A device mounted at the end of a crank on which you put your foot to turn the crank. Pedals are made from plastic, steel and aluminum alloy. Most have ball bearings. Toe clips and straps or cleated shoes can be attached to most pedals to improve pedaling efficiency.

Pedal wrench - A long thin wrench with a fifteen millimeter slot on one end, and sometimes a 9/16-inch slot on the other. Since pedals can become very tight a long wrench is required. Since some pedals do not allow for a wide wrench on their wrench flats, the pedal wrench is also thin.

Penny-Farthing - An antique bicycle which had a very large front wheel, and a small rear wheel. Before it was easy to manufacture gearing, front wheels were made large in order to attain greater speed for each revolution of the pedals. These bikes were heavy, had a lot of inertia and could not coast, so they took a lot of room to stop! Turning was a ponderous operation also. The ride was bumpy because the tires did not hold air, they were solid rubber. They were called Penny-Farthing after coins which were commonly used at the time. A penny was a large coin, and a farthing was small. Synonyms: big wheel, high-wheeler, boneshaker, ordinary. Antonym: When discussing penny-farthings, standard, modern-style bicycles with two equal-sized wheels were often called 'safety' bikes or just 'safeties.'

Pin punch - A device somewhat like a hardened nail with a handle. Pin punches come an in assortment of sizes. Use pin punches in conjunction with a hammer for driving friction fitted pins, turning plates with pin punch holes such as freewheel lockplates, and applying impact force to localized areas, such as removing crank cotters.  See also: Centerpunch.

Pitting - A type of failure in which a hard working surface looses some of its surface metal, in a pattern that looks like a potholed street. Pitting happens most frequently in bearing races, due to the high pressures of bearing balls pressing against the surface. Pitting is more likely to happen in adjustable bearings that are set too loose. Most bearing races are case-hardened, so the hard outer surface breaks away from the softer metal underneath.

Pivot - A hinge upon which a bicycle component can swing. The most noticeable pivots are brake levers, brake calipers, and derailleurs.

Planetary gearing - A system which provides two or more gearings in a small space. Most planetary gear sets are built in to the rear wheel hub, but one brand is built around the bottom bracket (crank).

The planetary gear set has a gear mounted on the axle which does not turn. Around that are three or four "planet gears" in a ring called the "planet carrier," and the whole works is surrounded by a "ring gear" which can also turn. There is a system of ratcheted or cogged devices that engages one of the aspects of the planetary gear set to the hub, and one to the sprocket of the wheel, but lets the others spin free. For instance, if the planet carrier is connected to the sprocket and turned when the pedals are turned, because the sun gear cannot turn, the outer surface of the planet gears are spinning faster than the sprocket. These turn the ring gear which turns the hub. On a three-speed hub, this is third gear. For low gear, the sprocket is connected to the ring gear, and the hub is connected to the planet carrier. For second gear, which is plain old one-to-one gearing, the sprocket is tied directly to the hub, and the gear set just merrily spins along doing its own thing.

Pletcher carrier - A specific brand of luggage carrier that mounts above the rear wheel. Packages are tied to this flat aluminum alloy rack, even though it has a spring clamp. The clamp is not strong enough, or general-purpose enough for most packages. Many savvy bicyclists cut the steel spring clamp out to save weight and reduce rattling. Synonym: Pletcher rack.

Presta Valve - A type of valve found on thin tire bicycle inner tubes and sew-up tires. This is thinner than the standard Schraeder valves found on most bicycle inner tubes. To let air out of a Presta valve, loosen the knob on top of the valve, and push inward. The knob cannot be unscrewed all the way. The little screw upon which the knob is mounted is very fragile, so turn the knob gently.

To put air into an inner tube with a Presta valve, unscrew the knob on top as far as it will go, then put the air into the tire. If using a standard inflator, you will need to screw a Presta adapter, available at most bike shops, onto the Presta valve first. When done inflating, remove the adapter, and screw the knob on top of the valve down gently.

Screwing down the knob is not essential, and in fact Presta valves in which the knob have been broken off still work fine. But it is a security measure to keep the air from getting out accidentally. 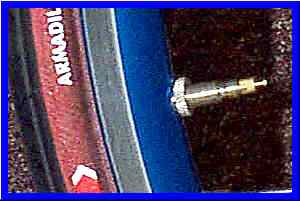 Presta adapter - An adapter designed to fit over Presta valves so they can be inflated with equipment meant for Schraeder valves.

Pre-stressing - After a wheel is built or trued, the spokes may have a bit of windup or may not be entirely seated in the holes in the hub or rim. When you first ride such a wheel, you may hear some assorted pops and pings, which disappear after a few revolutions. The best wheel builders pre-stress their wheels and then retrue them, so that the customer gets a stable, solid, quiet wheel right from the start. Synonym: Stress relieving.

Primer - A special paint with is not colorful, but which is applied before the final paint. Its purpose is to help the paint stick to the frame of the bike. Painting raw metal without first applying primer guarantees a weak paint job. Note that if the primer is enamel, then the cover coat must also be enamel unless the primer has had many days to dry before hand.  However, enamel can be sprayed over lacquer.

Puncture - A hole in the inner tube of a tire, resulting in no air, also known as a flat tire. Although a bicycle with a punctured tire can be ridden, there is a great likelihood of damaging the rim and the bicycle is difficult to ride. Punctures are frequent, because bicycle tires must be thin in order to be of reasonable weight. Fortunately, punctures are easy to fix and portable tools are made to accomplish the task. Tire pumps which weigh just a few ounces can be mounted with clips to the toptube, downtube or seattube of the bike frame. A good quality pump is necessary, since the cheapest ones often don't work even the first time you try to use them.

Purse - 1. The collection of prizes available at a race; 2. A handbag - an item that can be a real troublemaker with bicycles. Bicycle repair people soon lose count of the number of front wheels and forks they have to replace due to purses becoming caught in the spokes while riding. This can be injurious to the rider, so riding with a purse anywhere near the front wheel is not recommended.

Pursuit - A track race event in which two riders at a time compete. They start at opposite sides of the track, and use a variety of strategies to "catch" each other at the end of a pre-determined number of laps.