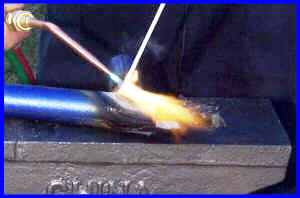 The strongest way to attach steel bicycle frame tubing is brazing.  This is a process similar to soldering, or using hot glue, but with a golden colored metal called brass.  Brass is not as strong as steel, and so is not used for knives, or bicycle frame tubing, but is a metal that's very much strong enough to attach steel tubes together.  Brass melts at a much lower temperature (1600 Fahrenheit - 870 Celsius) than steel (2300 Fahrenheit - 1260 Celsius).  As you approach a metal's melting point, the metal crystallizes, and it's alloys can separate.  So, if you can stay well below the metal's melting point, you'll end up with a stronger attachment.

'Slip,' 'flow' or lugged' brazing is the most common style. In this technique, frame tubes are joined with sockets called lugs. A large area, encompassing the lug and tubes are heated until brass will melt.  Brass rod is placed against the edge of the lug, and melts.  Capillary action causes the brass to flow into the lug, filling the gaps between the frame tubes and the inner walls of the lug. Slip brazing is very much like soldering copper plumbing pipes. This is a very strong method of attachment.  The drawbacks are:

* Precise fitting is required in order to create gaps of the proper width for the brass to flow.

* Cleanliness is very important, because dirt or residuals of oil of any type can cause places where the brass will not flow.

* It is difficult to see the difference between a well executed slip braze, and one that is not strong.

* Practice and experience are required for reliable slip brazing.

* If too much brass is added, it pools at the edges of the lugs, requiring reheating or careful grinding to clean up.

Fillet brazing is used when lugs are not available or appropriate. Two parts - usually frame tubes - are filed or ground to fit well together, and clamped in position.  A small flame is brought close, and an area of tangent tubing is heated enough to melt brass.  The brass is applied from a rod with very careful control of the heat so that it doesn't melt and flow all over the place, but melts only sufficiently to glue the two parts together.  The torch and the brass rod are moved along the joint, building a fillet, or a ridge of brass all the way around the intersection.  Sometimes, the tubes are joined without a lug, but with slip brazing where they touch before fillet brazing is applied over the top of the slip braze.

Fillet brazing is used for all sorts of things other than frame tubing.  You can use fillet brazing to build jigs, repair household items, and make or fix tools.

Silver brazing rod is brass rod with as much as 40% silver alloyed in. You can stay even further away from steel's melting point using silver brazing rod (often mistakenly called silver solder) which melts at as low as 1200 Fahrenheit - 648 Celsius.  Silver brazing material is also more liquid when it's melted, however it doesn't have as much strength for fillet brazing as normal brass.

Let's Do a Slip Braze

2. Prepare two frame tubes by mitering one to fit against the side of the other.  Find a lug that fits nicely.  The tubes should be somewhat difficult to push into the lug, but not so firmly that they can't be disassembled by hand.

3. Clean the lug and frame tubes totally.  No rust, oil or paint is allowed.

4. Mix powdered brazing flux with water to end up with a paste.  Coat the ends of the tubes with flux, and push them into the lug.  Hold the assembly in such a way that you can access both sides, but without any stress or gravity pulling on the assembly.

6. Wave the torch over the entire area of the lug and tubes, keeping the torch 1 or 2 inches (2.5 to 5cm) away from the parts. The idea is to bring everything up to the same temperature at once, without overheating any part.  If you are starting to overheat a part, you'll see it turn redder than the rest.  Places to watch are points and edges of the lug.  If you sufficiently overheat a part, it will be crystallized upon cooling, and will not be as strong as it should have been.  Also, overheating can burn the flux, making a mess through with the brass will not flow.

7. When the flux starts to melt, apply the brazing rod to an edge of the lug.  Soon, some of the rod will melt, and the brass will float into the gap between the lug and the tubing. Keep waving the torch around.  Do not let the torch get too far away. The exhaust from the flame, along with the smoke made by the flux will keep oxygen away, since oxygen is the enemy of good brazing.  Once the area is oxygenated, the brass will not flow properly.

8. Continue adding brazing rod at the edge of the lug.  If you are a good slip brazer, you'll be able to add the rod at just one point along the lug, yet the entire intersection will be filled with brass. You are done when you see brass at all the edges.  If you go too far, you'll end up with bulges of brass at the edge, especially under the bottom of the lug.  Keep waving the torch around, never let it idle in one position.  Keep an eye for overheating - redness that starts to glow more brightly than the rest of the intersection.

Let's Do a Fillet Braze

1. Miter a frame tube to fit against another.  They should fit so closely that there is no gap of more than .020" - 1/2 millimeter.

2. Clean the tubes entirely.  No paint or oil residue is allowed.

3. Clamp the tubes so that you have access to the entire intersection, and so that no stresses are applied.

4. Mix some brazing flux with water to create a paste, and brush it around the intersection.

5. Let's start with a lugless slip braze, and then we'll apply a fillet braze over that. Use a fairly large torch tip, #2 or #3 are good sizes.  Light the torch.  Pick up a fairly small flux-coated brazing rod (1/16" or 3/32") in one hand, and wave the torch all over the intersection with the other hand to pre-heat it. Keep the torch about 1 to 2 inches (2.5 to 5cm) away from the parts. Be careful about overheating the edges of the tubing.  When you see the flux start to melt, apply the brazing rod to the intersection.  It will melt, and flow throughout the intersection.  You may need to apply the rod to a couple of places around the intersection, unless your parts fit together very well.  Keep waving the torch around, never let it idle in one position.

6. When the brass has flowed entirely into the intersection, turn off the torch and switch to a smaller torch tip such as #1 or #2.

9. After your intersection cools, put on clear goggles and chip off the brazing flux.  Examine your work.

10. Put the intersection in a vise and bash at it with a sledgehammer.  Really! The point is to break it to see how well you did. If you have done a good job, the steel will tear an inch away from your intersection, but the intersection itself will remain intact.  If the steel tears very close to your intersection, you probably overheated and weakened the steel.  If the intersection fails exactly where it was brazed, you may have let oxygen get to your work (use more flux, keep the flame exhaust flowing over the hot area), may not have cleaned the pieces sufficiently before brazing, or may not have let the brass flow sufficiently to attach to the steel.  You may have not used enough brass - built up a big enough bead - but this condition is more rare than the others.

Please feel free to link your web pages to www.bikewebsite.com - Thanks!